Pujya Jogi Swami Hariprakashdasji is endowed with all saintly virtues and blessed with high spiritual power.

This realized saint was born at Bhadara (Dist-Jamnagar ) in v.s.1966 in the Bhandari family He was named as 'Devji'.

From the age of five , he was going to Bhadara temple and during childhood he was thinking to leave worldly attachments and to join Tyagashram.

Devji Bhagat came in contact with Rev. Mahant Swami Krishnajivan dasji , when he visited to Bhadara. 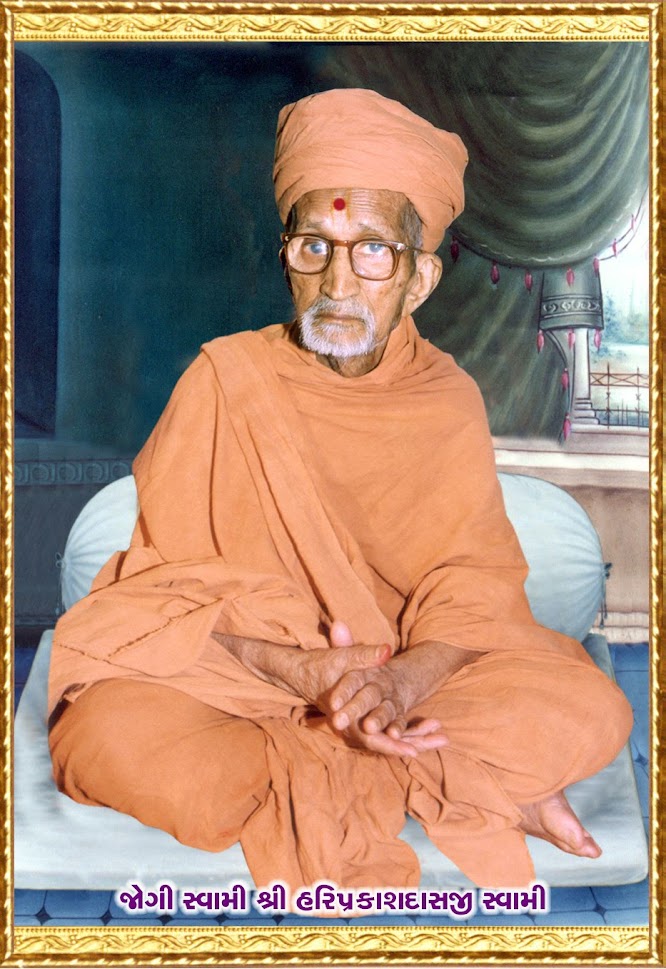 Mahant Swami could see the hidden abilities of Devji Bhagat and therefore he was taking keen interest in him and taking him to nearby villages alongwith him. Once Devji Bhagat had gone to Gondal , when Mahant Swami was there. He decided not to return to home and stayed over there in the temple , for which He was craving since long.

He was given initiation as a saint in v.s. 2001 and was named Hariprakashdasji.

He used to undergo penance and observed fasts (different Vratas) many a times.

Though he was not literate, he was able to read shikshapatri. · After passing away of Mahant Swami, he stayed with Shastriji Maharaj in Rajkot Gurukul,. Here he liked the religious atmosphere. Shastriji Maharaj also knew about his high spiritual achievement and was pleased by his devotional life.

He passes most of his time in meditation , chanting God's names with a rosary and hearing vachanamrutams which he likes the most .

He is a very kind hearted saint and solved distress of many people by God's grace. Whatever he blesses from inner inspiration comes true.

By his inspiration many temples have been built in the villages by Rajkot Gurukul.

On his call many have left bad addictions and have joined holy fellowship,

Shri Alexander, the Hon. Chancellor of South Carolina University Aiken, of America said after his experience regarding Swamiji that Jogi Swami can make unbelievable things possible by his spiritual power.